Yesterday I bought the fourth volume of the life of Jesus by Catherine Emmerich. It’s very vivid in its description in the days leading up to the paschal gathering and The Passion of Jesus. One word that stuck out was ‘Portico’. Emmerich mentioned that Jesus often preached from within a Portico. Admittedly I did not know what this meant so I looked it up. Portico is a particular type of architecture used in ancient times and is still used today. The inner perimeter of the second temple was lined with Porticos on either side of the Sanctuary.

When one receives a vision you can see things that you find hard to describe. It takes time for the image you see to be unpacked in your mind. Over time knowledge comes that gives the vision more meaning. During lent of 2021 I was given a quick glimpse into the mocking of Jesus. Jesus’s body was weak bloodied and defenceless. Our Lord was held was held aloft in a ‘mock parading of a king’. When a governor or ruler went from place to place he would be held aloft on a royal chair. These roman soldiers were mocking in this way. About five soldiers held Jesus up over their shoulders. They held him up just outside the portico and carried him inside to then throw his body against the wall.

Ill attach a link about earlier writings from March 2021

Like Loading...
19th March 202130th August 2022 interceed77
On Palm Sunday Jesus entered Jerusalem meekly on a donkey showing us a victory. Through his suffering he took on our sins and paid a price for us all. He then conquered death clearly shown in his resurrection.
Maria Divine Mercy in a message from Jesus mentioned a carnival atmosphere. Crowds of people some of them who were poor, had been allied to Jesus but were now easily controlled by the temple elite to turn against him. I sensed this during my prayers that this was the case. I had a glimpse of people running about or walking fast . Poor people were swept away given the permission of authority to run wild. How this must have broken Our Lords heart. The very people he had loved had their hearts turned against him. People from all over the holy land would have witnessed this as many travelled to Jerusalem for the Passover. 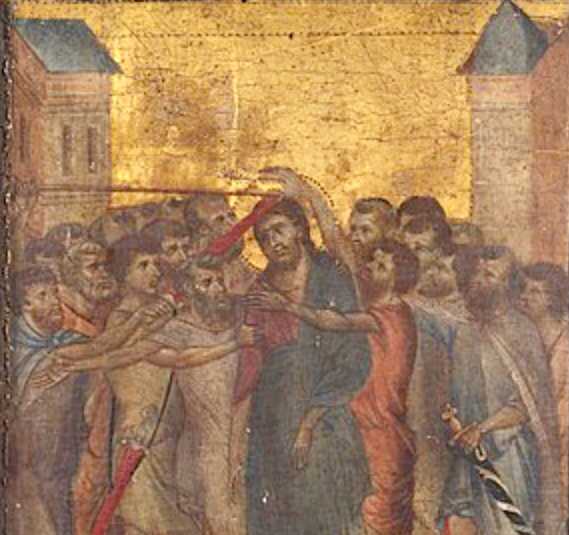 I had previously mentioned in a blog that Jesus was hoisted up on the shoulders of roman guards and then thrown against a wall. This was a mocking reversal of the entrance only made the previous Sunday. It has become clearer in my mind that they carried him like they were mocking Our Lord as King. Only to then throw him against a wall. Jesus was shoved and thrown around like he was a piece of meat. Many felt welcome to take part in being cruel to him.
I received more glimpses tonight during prayer. I saw the Pharisees or Sanhedrin laughing with roman guards in a groveling attempt to get them to be more brutal. Like when someone nudges you on the elbow and points and laughs. The temple elite showed themselves as calculated and the romans didn’t care for human life.
The last glimpse I have received was a side view of our lord on the cross and his hair was matted and wet from blood and sweat. In the background residential parts of Jerusalem can be seen.
What is clear despite the physical cruelty was the mental suffering that Jesus endured. The mocking, the rejection, the loneliness and betrayal all contribute to the most awful suffering that anyone could endure. Like seeing your Father or Brother brutally beaten and tortured and not being able to intervene to stop it.
Jesus was treated like a hated pariah in a carnival of horror.

My Son was tortured beyond belief.

Q: Did they throw Our Lord against a wall?

See the “Welcome” homepage to make a prayer request: My Sacred Shelter

This website is consecrated to God and His Holy Mother, Mary. It is under the protection of St Michael Archangel and St Joseph. Amen.